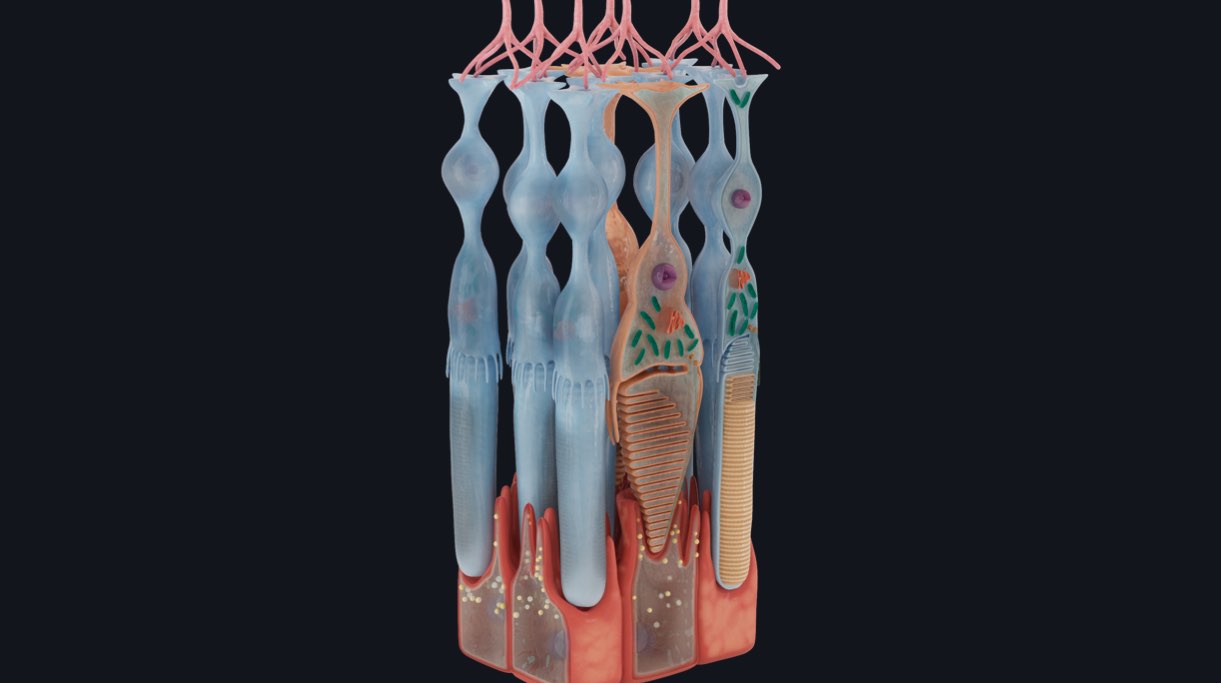 We’re getting closer by the day to our summer release at Complete Anatomy HQ, with everything in the final stages of testing. In the meantime, get an exclusive look at the latest addition to our Cell Biology family – The Photoreceptors.

Did you know that there are two types of light-sensitive photoreceptors in the retina??These cells are known as the rods and cones. At night, when light levels are low, the rods are the main photoreceptors ?.  This type of vision is referred to as scotopic vision and has high sensitivity, but a lack of color vision. On the other hand, the cones are the primary photoreceptors used in the daytime when natural light levels are high?. This is called photopic vision and provides color vision, while the overall clarity of vision is high. Mesopic vision occurs when both rods and cones are used and is common after sunset or before sunrise.

Despite their different functions, rods and cones have several structural similarities. They both have an outer segment composed of membranous disks which contain photopigment. Photopigments undergo structural change in response to light. They also feature an inner segment that houses the cell nucleus and gives rise to synaptic terminals that connect to the bipolar or horizontal cells discussed in last week’s snippet ?.

But how do photoreceptors convert light to an electrical signal? To understand this process, it helps to think of phototransduction as a 3-person relay race ?. When a photon of light contacts a visual pigment molecule it is like the starting gun ?. A series of proteins are activated that lead to hyperpolarization of the photoreceptor, the first sprinter. When the photoreceptors become hyperpolarized, the amount of neurotransmitter released by the photoreceptors is decreased. The bipolar cells respond with a change in their membrane potential. Think of them as the middle runner, transmitting the signal from photoreceptors to ganglion cells ?. The ganglion cells are the only cells in the retina with axons that leave the eye and they run the final leg of the race ?. These electrical signals travel through the optic nerve to the occipital, parietal and temporal lobes of the brain, and eventually get processed in the brain. But that’s a for another snippet!

We’re working round the clock to deliver our biggest update of the year, and we’re very nearly there. Be sure to opt-in for New Technology Previews in your email preference, and be the first to find out when our summer release lands on the app stores.