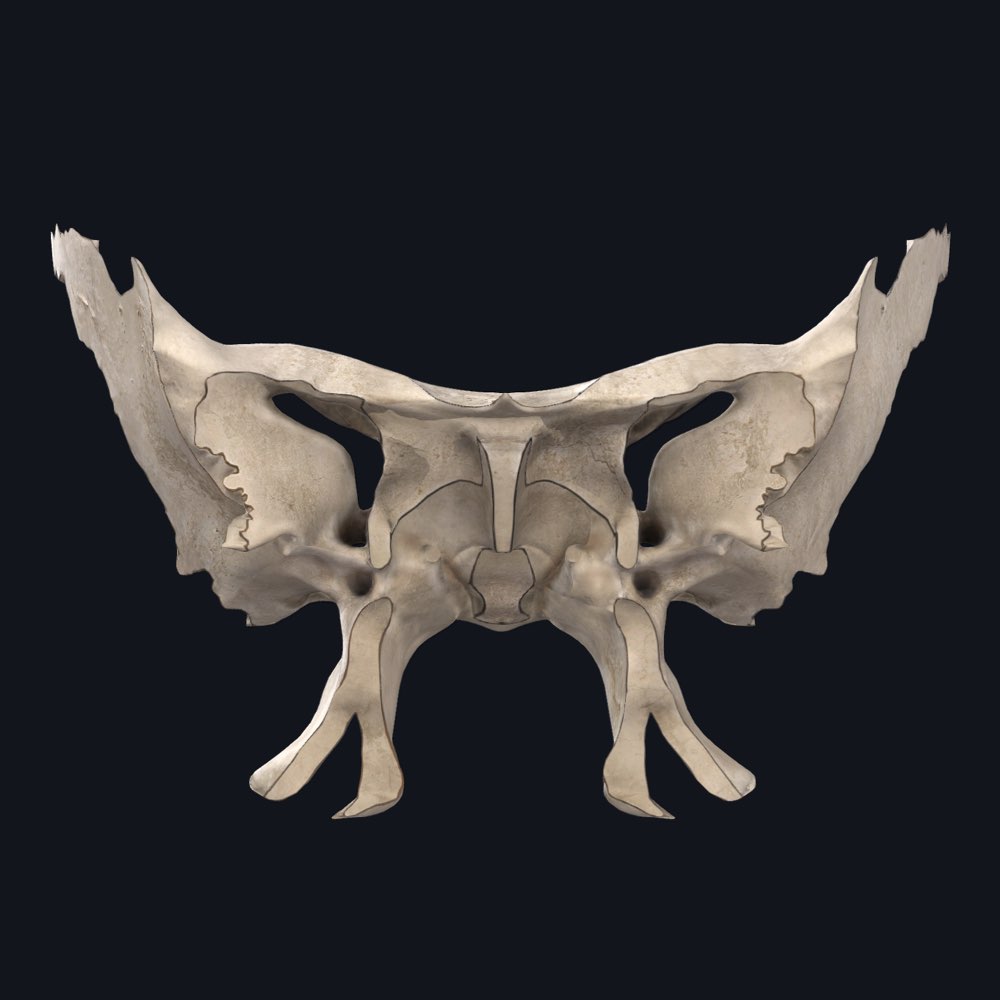 The sphenoid bone could be considered one of the most functionally important bones in the entire body. Situated in the centre of the skull it acts like a keystone, wedged between 8 other bones of the skull. This is naturally where it’s name comes from, in Latin, ‘sphen’ translates to wedge.

Often described as taking the shape of a butterfly or a bat, it has a central body, two greater wings accompanied by two lesser wings and two legs consisting of a medial and lateral pterygoid plates each. It contributes to the pterion on the lateral side of the skull. It also forms the floor of the middle cranial fossa and the posterior border of the orbit where the eye sits.

Being so centrally located, the sphenoid bone acts somewhat as a bone of transition, allowing various vessels and nerves to pass through its many foramen. The ophthalmic nerve and artery, for instance, will pass through the superior orbital fissure to reach the eye.

What’s particularly unique about the sphenoid bone, is that on its cranial surface, the body has a deeply concave surface called the sella turcica. It is bordered by the anterior, middle and posterior clinoid processes, which are points of attachment for the dura mater of the brain. The folding dura mater creates a canopy over the concave space, which will sit and protect the pituitary gland, the master gland. After all, sella turcica translates to, ‘seat of the saddle,’ or, ‘Turkish Saddle.’

Due to the large bilateral sphenoidal sinuses that sit within the body, there is only a very thin layer of bone that will separate the sella turcica on the cranial aspect from the nasal cavity. This is why it is chosen by surgeons as the route of choice to remove pituitary gland tumors, transsphenoidal adenomectomy. Take a look at the relationship between the sphenoid bone and the nasal cavity in our app to see for yourself.

❓Question time: Do you know what structures pass through foramen rotundum, foramen ovale and pterygoid canal of the sphenoid bone?