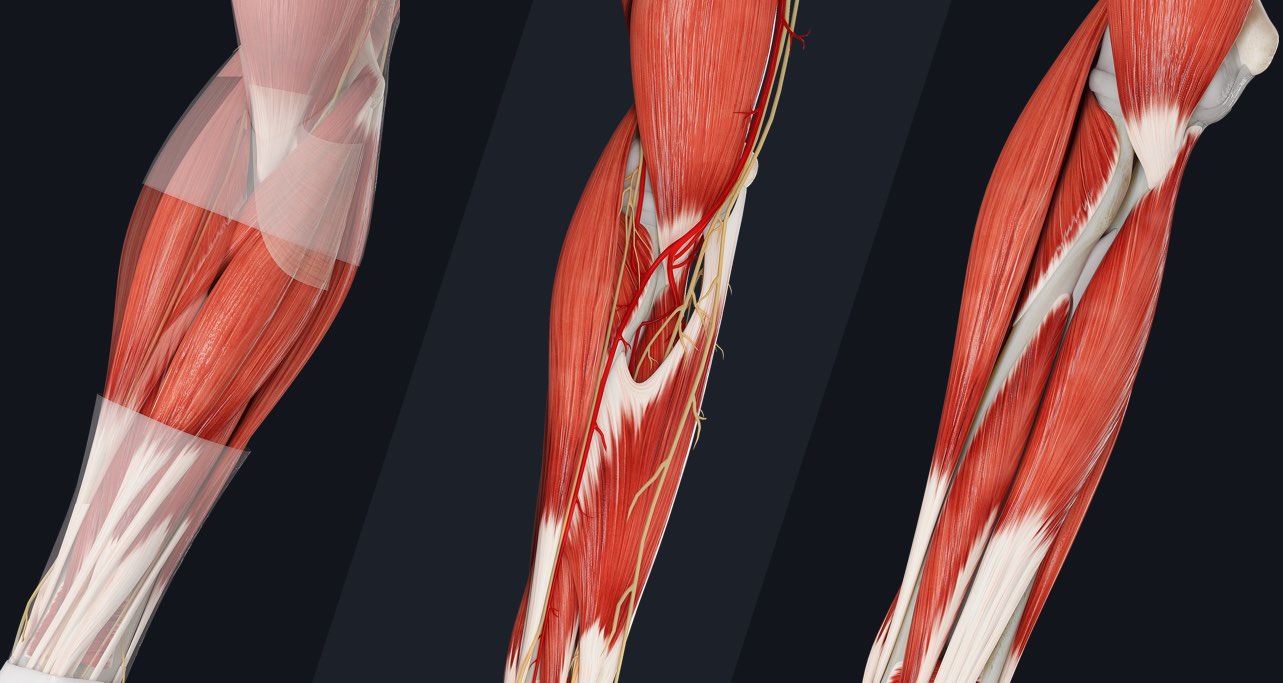 The muscles in the forearm control the fine and intricate movements of the fingers as well as the gross and forceful movements of the hand and wrist. These muscles are divided into two compartments, based on both anatomical and functional differences. The posterior group is involved primarily in extension of the wrist and fingers and supination of the hand. Conversely, when contracted the muscles of the anterior compartment cause finger and wrist flexion and supinate the hand.

The boundary between these two compartments is composed of two bones, the radius laterally and ulna medially. Bridging the gap between these two bones is a tough connective sheet called the interosseous membrane. Close to the elbow joint, the biceps brachii tendon divides the two compartments however the lateral boundary is less distinct distally with some of the muscles of the posterior compartment occupying lateral, and sometimes, anterior space.

In the anterior compartment, the muscles are divided into three groups. The superficial group contains four muscles all originating from a common tendon on the medial epicondyle of the humerus (image 1). They are pronator teres, flexor carpi radialis, palmaris longus, and flexor carpi ulnaris. The intermediate group contains only one muscle, flexor digitorum profundus (image 2).

It is between the two heads of this muscle that the median nerve and ulnar artery travel. Finally the deep group has three muscular components, flexor digitorum profundus, flexor pollicis longus, and pronator quadratus (image 3).

Along with all of these muscles, the median and ulnar nerves, and ulnar artery are also enclosed in the tough antebrachial fascia that surrounds this compartment.

Many of these muscles have tendons that enter the hand between the transverse carpal ligament and the carpal bones, in a space known as the carpal tunnel. Repetitive use of these muscles, such as typing on a computer (think flexion of the wrist and fingers) can cause these tendons to become inflamed and compress the local nerves leading to pain, tingling or numbness in the palm of the hand, in a condition also known as carpal tunnel syndrome.

Explore all the muscle compartments of the anatomy with the world’s most advanced 3D anatomy model, in addition to a suite of learning features such as Innervation, Arterial Supply and Muscle Motion. Try it for FREE today.