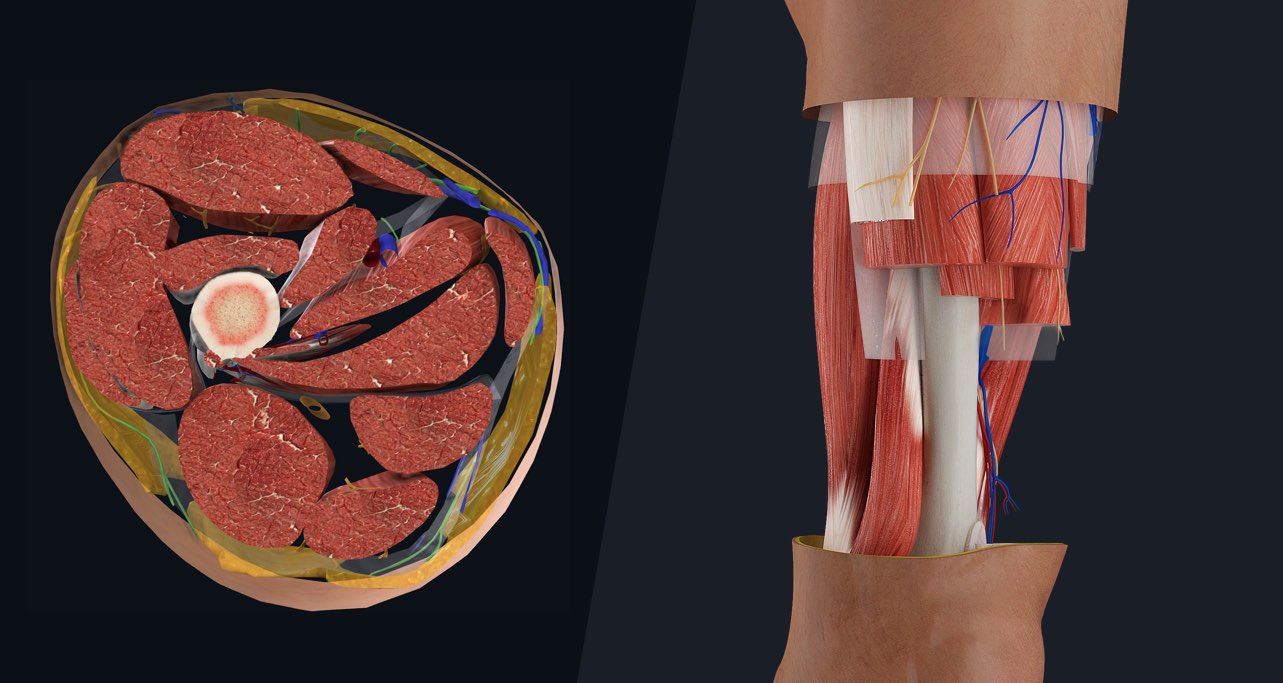 Similar to the upper limb, there are fascial planes dividing the functional muscle groups in the lower limb. Both the thigh and leg are divided into three separate compartments. A condition known as compartment syndrome most commonly affects the divisions of the lower limb, although the upper limb may also be affected. Let’s take a look at the compartments in the thigh, and then discover why compartment syndrome is a potentially serious condition requiring emergency surgical intervention.

Surrounding the centrally located femur are three intermuscular septa, creating divisions between the anterior, posterior, and medial compartments of the thigh.

There are three long muscles in the posterior compartment, all of which flex the knee joint and extend the hip joint. These muscles are collectively referred to as the hamstrings (?Bonus points for anyone who can tell us why they are called hamstrings❗) – they are biceps femoris, semitendinosus, and semimembranosus.

The medial compartment of the thigh contains six muscles – gracilis, pectineus, obturator externus, and adductors longus, brevis, and magnus. All of these muscles adduct the lower limb (or bring it closer to the midline) except the obturator externus, which laterally rotates the thigh at the hip.

As we said before, each of these compartments are encapsulated by tough, inextensible fascia which helps the groups of muscles to move around one another and limits the spread of infection. However this fascial layer can also lead to a pretty serious condition called compartment syndrome. This occurs when a compartment swells which may be caused by trauma or infection. The swelling of the tissues leads to compression of the other structures within the compartment, as the tightly bound fascia prevents expansion. Blood vessels can become compressed and blood will not be able to flow into or out of the compartment, leading to ischemia of the tissues.

The remedy for this condition is to make an incision in the fascial layer surrounding the affected compartment, allowing the tissues to expand and blood flow to return to the area. This is called an emergency fasciotomy and is usually left open for a few days to allow the tissues to recover before being closed, sometimes with a skin graft.

Visually understand in 3D the different muscle compartments of the limbs with the world’s most advanced 3D anatomy platform. To see how Complete Anatomy can transform your learning, at home or in the classroom, try it for FREE.