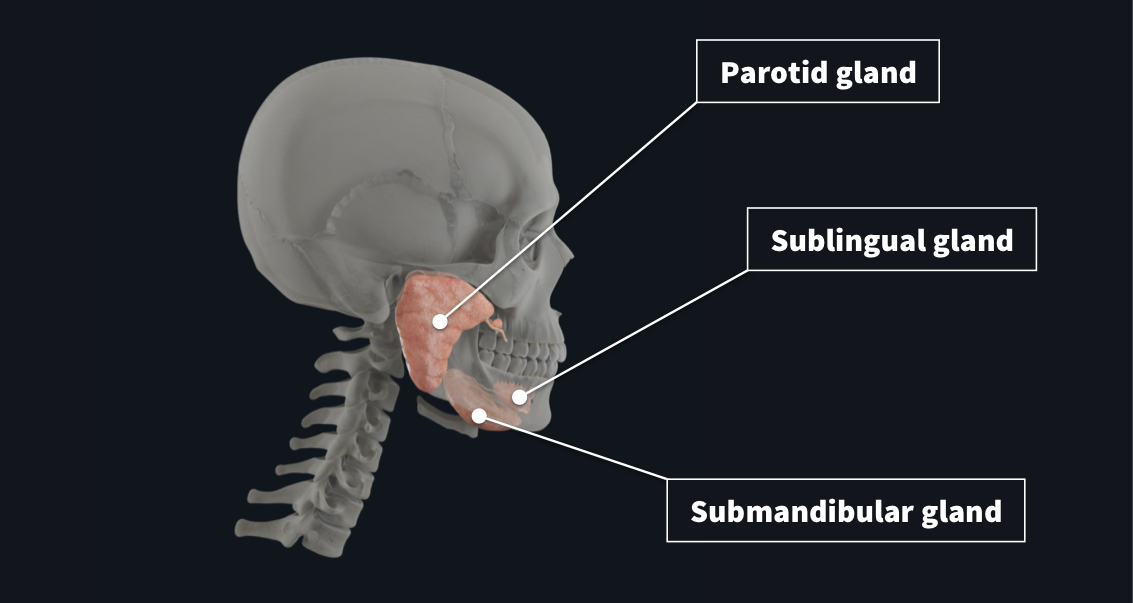 Saliva has several functions; it lubricates fluid to aid in mastication and swallowing, contributes to  tasting, and aids in digestion through lipases and amylases. It also enables proper speech and is a key component in the body’s defense against infection.

There are also over 600 minor salivary glands found throughout the oral cavity. These include lingual, buccal, palatal and labial glands. The majority of these glands produce mucus, except for Von Ebners glands found on the tongue, which secrete serous fluid.

Let’s take a closer look at some of the major salivary glands:

The parotid glands are the largest of the salivary glands. They are located superficially in the lateral aspect of the face, anterior and inferior to the ear. Each parotid gland is made up of lobules of glandular tissue and weigh approx. 25g. These glands secrete serous fluid upon parasympathetic stimulation.

The submandibular glands are the second largest glands. Each gland is about half the weight of a parotid gland. They are found within the submandibular triangle of the anterior neck and secrete both serous fluid and mucous. These glands produce the most saliva.

The sublingual glands are the smallest of the major salivary glands. They are almond in shape, unlike the other two which are irregularly shaped. These glands can secrete both serous fluid and mucous but mainly secrete mucous fluid.

Common disorders of salivary glands include:

Sialolithiasis – The formation of salivary, calcium-rich stones. These stones can often exist without causing any symptoms. However, if a stone blocks a gland duct; they can hinder the flow of saliva and lead to an infection.

Sialadenitis – Is an infection of the salivary gland, mostly caused by bacteria and salivary stones. Symptoms include swelling of the affected gland accompanied by pain, tenderness and redness on the overlaying tissue.

Sjögren’s syndrome – An autoimmune disease, where the body’s immune system targets the moisture producing cells found in glands, including the lacrimal and salivary glands. Often results in swelling of the glands, dry eyes and a dry mouth.

Discover how all the different parts of the digestive system relate to each other anatomically with our advanced 3D anatomy platform. Try it for FREE today.