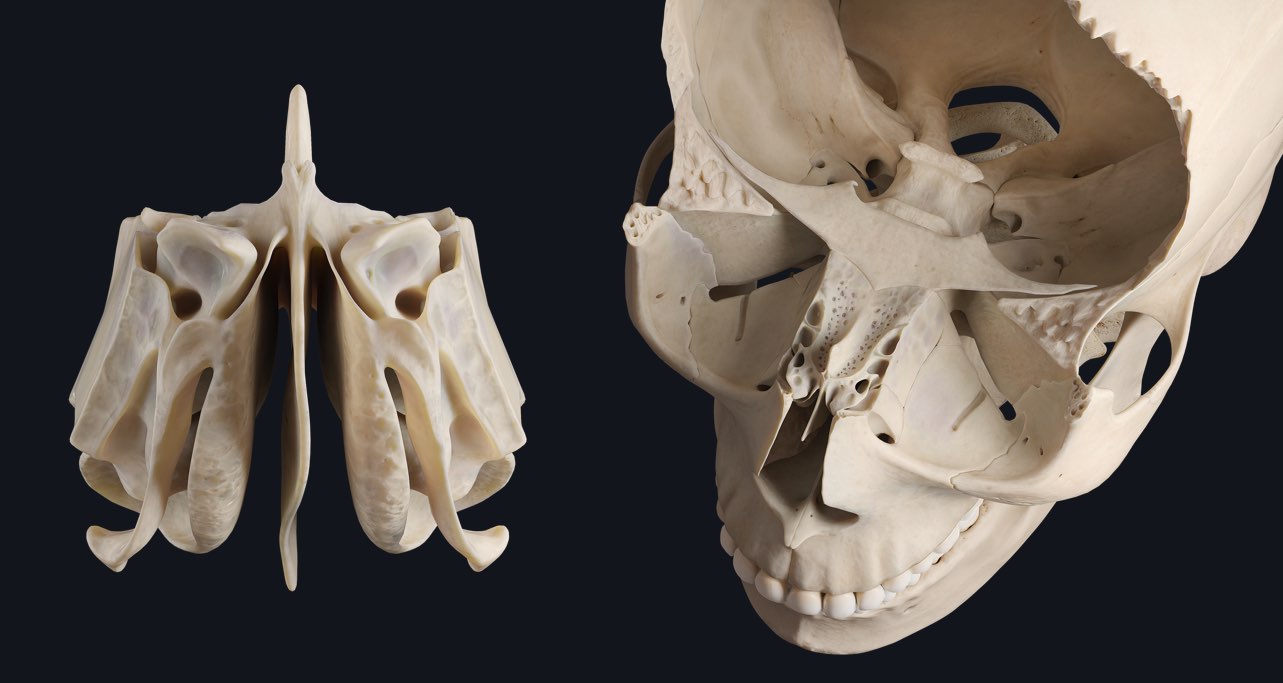 The ethmoid is an irregular, air filled bone located in the middle of the face between the eyes. It’s a complex looking bone with many intricate features. So why would a bone in the skull evolve such a complex shape?

The ethmoid bone can be considered in four main parts, all of which we can nicely appreciate in this first anterior view. There are two lateral masses, one on each side, an inferior projection along the midline called the perpendicular plate, and a super projection called the crista galli.

The perpendicular plate projects inferiorly, along the midline, to divide the nasal cavity into left and right sides. Posteriorly, it meets the body of the sphenoid, and inferiorly the vomer. It is commonly confused with the vomer, however the posterior relationship with the sphenoid distinguishes the two.

There is a similar midline projection superiorly, the crista galli. This is a bony anchor for the falx cerebri which divides the two cerebral hemispheres. The superior surface of the ethmoid has some other remarkable characteristics. Lying lateral to the crista galli are the cribriform plates. This is the only part of the bone that contributes to the neurocranium and it is a bed for the olfactory bulbs. The small holes in the bone allow for downward projections of the olfactory nerve into the nasal cavity below. The frontal bone is firmly attached to the anterolateral aspects protecting these anterior structures.

The ethmoidal sinuses are sometimes implicated in sinusitis, along with the other paranasal sinuses. Keep an eye out for more information on sinusitis coming your way soon!

The ethmoid bone is just one of many complex bones that have been painstakingly remodelled for our upcoming Head & Neck model update. Coming soon to Complete Anatomy.