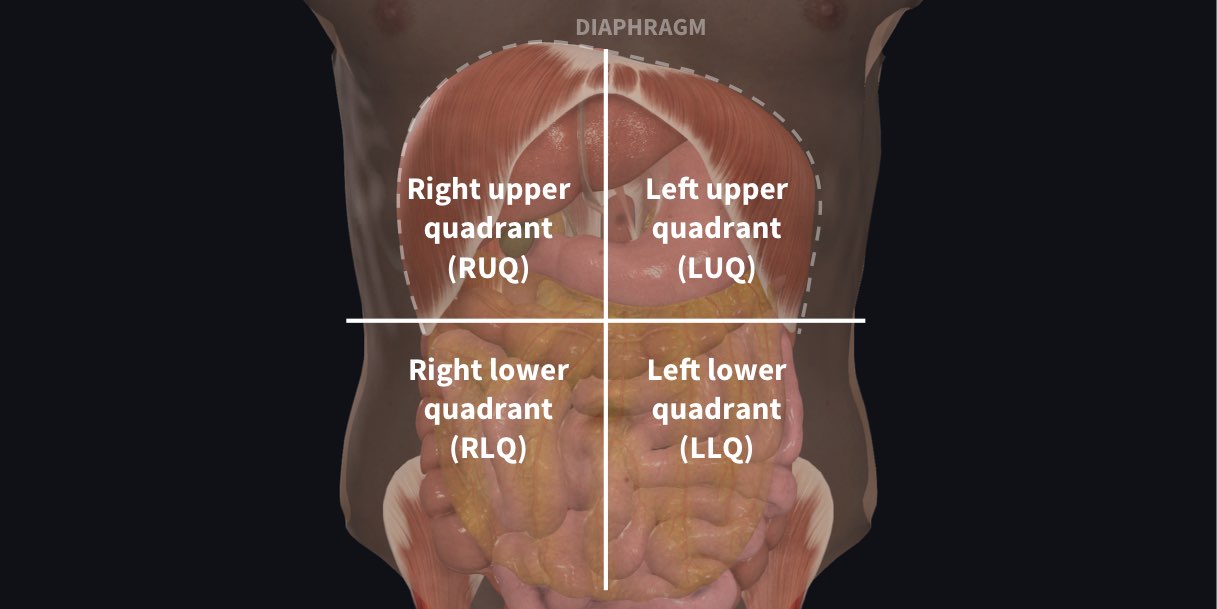 When a patient presents with abdominal pain, determining the location of the pain provides a useful starting point that guides further work for the clinician. Let’s take a closer look at the abdominal divisions which form a vital part of the physical exam.

The abdominopelvic cavity can be subdivided into four quadrants and nine regions. The quadrants represent locations; they are formed by a vertical imaginary line drawn through the linea alba from the xiphoid process of the sternum to the pubic symphysis and a horizontal line passing through the umbilicus. This divides the abdomen into four quadrants:

The nine regions are smaller than the four abdominopelvic quadrants: The dividing planes are based on horizontal and vertical lines, drawn between palpable bony points.

The two vertical planes are similar on each side and follow a line joining the mid-clavicular point to the mid-inguinal point.

These planes divide the abdomen into nine regions:

The abdominal divisions should be used in conjunction with other diagnostic approaches in order to accurately diagnose a patient’s condition. For instance, a right lower quadrant pain suggests acute appendicitis. However, an optimal approach to diagnose the basis for abdominal pain should rely on the likelihood of disease, complaints, and other features of patient history, findings on physical examination, laboratory tests, and imaging studies.

Become familiar with the anatomical divisions by exploring the world’s most advanced 3D anatomy platform in Complete Anatomy. See for yourself and try it for FREE today.