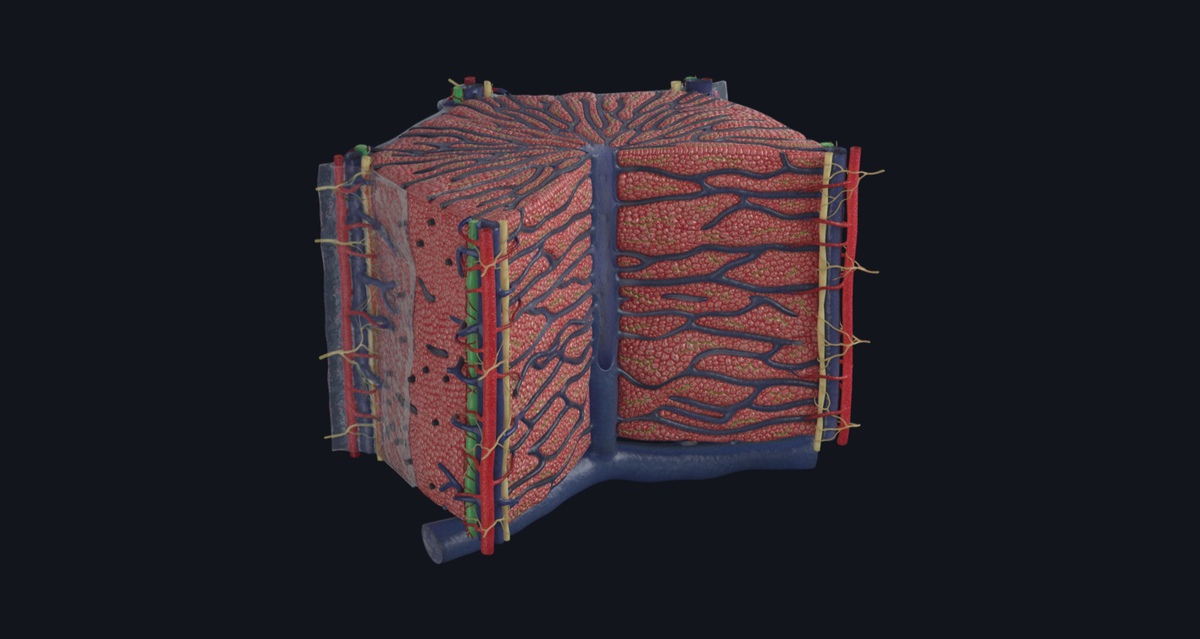 The liver is the largest visceral organ in the body. It consists of multiple lobules, with one liver containing about 1 million classic lobules. Our newest microanatomy model, the “Hepatic Lobule” offers a detailed view of one of these lobules to allow users to explore and appreciate the building blocks of the liver.

Many of the liver’s functions are carried out by the polyhedral epithelial cells, the hepatocytes. Various components of the cells are responsible for carrying out the different functions, for example the smooth endoplasmic reticulum contains enzymes that are involved in the degradation of toxins and drugs—one of the livers most well-known functions. Peroxisomes are also involved in the detoxification of alcohol and breaking down of fatty acids, while Lysosomes are responsible for storing iron.

Bile canaliculi are formed by the membranes of adjacent hepatocytes. They make up a network of channels 🕸️ that transport bile produced by the hepatocytes to the bile ducts 🎋 found in the portal triads at the angles of the lobules.

The interlobular vein is responsible for carrying nutrients, metabolites and any toxins ☢️ absorbed to the sinusoids—the blood channels found extending from the portal triad through the hepatocytes. The sinusoids receive both arterial and venous blood, they detoxify the blood before emptying it into the central vein.

The central vein then drains directly into the sublobular vein, which drains into the larger hepatic vein ultimately carrying deoxygenated blood from the liver back to the heart.

You can explore all of this and more in Complete Anatomy, try it for FREE today.